In 2022, Rotex and District 4730 open its doors to host the 5th International Rotex Convention and reunite Rotex Clubs all over the world to share knowledge and grow a stronger Rotary Alumni Network.

Ever since the 4th Rotex International Convention held in Taiwan in 2018, we’ve been waiting for a new moment of getting together with our friends from all over the world to share moments of happiness, intensive learning, and creating new memories which would last forever in our minds. The convention first scheduled for 2020 had to be postponed due to an unexpected event: the pandemic. In 2021 the Convention couldn’t take place again and the postponing was the only solution. Finally, we expected that in 2022 the event could come true… Unfortunately, it became impossible to carry on with the Convention this year mainly due to higher costs and a general lack of momentum in our organization.
We look forward to what the future of the Youth Exchange Program and Rotex work reserve and we’re sure that every Rotex will give their best in their role within their districts during the comeback as the pandemic recedes.
Stay tuned to Rotex International media for news about Board Elections, Rotex Convention, and further information.
Thank you for your comprehension and partnership thus far.
Best,
HOC

After four successful editions, the Rotex International Convention lands in the Americas for its 5th edition in Brazil. This is the biannual chance that hundreds of Rotex members have to gather and share their experiences in empowering exchange students from the moment they decide to participate until moving on to the next steps in their lives.

This edition will take place in the southern Brazilian city of Curitiba, starting on the 13th of august of 2020 and ending on the 16th, followed by an 8-day trip. Curitiba is the capital of the state of Paraná and home to Rotex 4730, an Alumni Association founded in 2008.

We are looking forward to welcoming all the Youth Exchange Program Alumni and Rotarians to the 5th Rotex International Convention in Curitiba, Brazil. There, we will learn all about the alumni association also known as “Rotex” and how to make this big network even more connected. Whether in a plenary or a breakout session, enjoying the International Evening and Gala dinner, or exploring the beauties and culture of Brazil during the post-trip, you’ll meet people just like you from every corner of the world. The first edition in the Americas will make easier the participation and involvement from Rotexers of the nearby countries, enriching the exchange of ideas. Therefore, our motto will be :

The Position of Rotex

After the Conventions in Hannover 2016, Brussels 2014 and Bordeaux in 2012, The Fourth convention in 2018 was hosted by District 3490 in Taipei. We believe through discussion we could connect and build up the near future for the benefits of all Rotex.

As we all know, Rotex plays a very important role in the Youth Exchange Program, either through helping the inbounds with their transition into their host country or preparing the outbounds with knowledge about their future exchange life. We are kindly inviting all of the Rotary Youth Exchange alumni to the 4th Rotex International Convention from 3rd August to 6th August 2018 (3rd August to 13th August 2018, With Post-Trip) in Taiwan. Each convention is a great opportunity to meet other committed Rotary Youth Exchange Alumni and learn how to improve both the Youth Exchange program and the future Rotary network.

“The Position of Rotex.”

Youth Exchange has existed since 1929 and without a doubt, Rotary Youth Exchange Alumni has existed as the first exchange students came back from their exchanges. Many of the alumni have become very successful, and serve as a model for our fellow exchange participants. Today, you can find Youth Exchange Alumni that understand Rotary and share the same spirit, in participating, helping, and hosting the Youth Exchange Program all over the world. You can even find some alumni groups dedicating their time and effort to helping and volunteering in society as they believe that they have the responsibility of using their experience with Rotary to do more in the world. The ability of alumni to evolve and change the world is only possible because of the Rotary Youth Exchange Program.

Therefore, we are more than thrilled to welcome all Rotary Youth Exchange Alumni to the 4th Rotex International Convention in Taiwan. There, we will learn the fundamentals of starting an alumni association also known as “Rotex.” Whether in a breakout session, enjoying the Gala dinner, or exploring the post-trip, you’ll meet people just like us from every corner of the world. We will also get helpful information from the Rotary Alumni Association in order to build a better Rotary Network. Many intriguing workshops will be held so that, together, we can shape the future of Rotary.

We – Rotex 1800 and Rotex 1890 – have the honor to organize the 3rd International Rotex Convention. It will take place the 11th until the 14th of August 2016 in Hannover, Germany

If you have been at the 1st Rotex Convention in Bordeaux, France or the 2nd Rotex Convention in Brussels, Belgium you might already have an idea of this event. Everything started in 2012 when Rotex from all over the world came together to share experiences and discover new horizons. The main question here was “How to build up a Rotex club”. The success of this convention was confirmed in 2014 when the 2nd Convention was hosted in Brussels. Again young people came together to discuss matters according to the topic “how to improve Rotex”.

In 2016 it’s convention time again. Of course, we will continue the process of improving Rotex. We want to make another step towards a closer partnership between different Rotex clubs as well as between Rotex and Rotary.

Convention organized in Belgium to reunite Rotex’s members from all over the world for 3 days. It’s all about exchanging experience and knowledge. 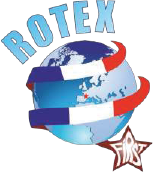 Rotex 1960 organized an international Rotex convention on July 6-8, 2012 in Bordeaux. The goal of this convention was to gather the most past exchange students in the world, whether they are part of Rotex or not.